Big thanks to Antiverse and Tuna Mansion

Thanks to Tuna Mansion for letting peeps stay for a couple weeks and having events there. 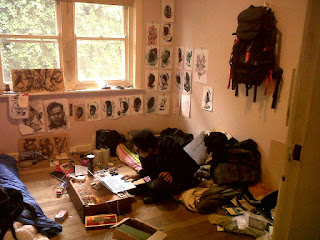 And big big thanks to Antiverse for letting Bayu Widodo, El Kampretto, and LoveHateLove stay for nearly two months at your home and sometimes community venue. You guys are all seriously awesome and amazing and we really appreciated your support. And also a special big ups to Stew and Ari for letting them camp in your studio. 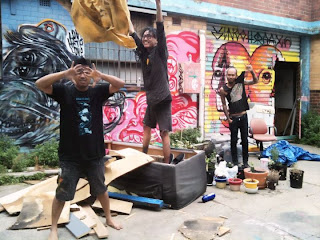 BIG UPS AND THANKYOU TO 567 KING

ASiiK CIty owes a massive amount of gratitude to 567 King and Mamma Jude. Faced with an Empty Show opening in the mid morning, and learning at midnight the night before that friends of ILP had left all our paint in melbourne, Mamma Jude and 567 King came to the rescue.

Thanks for having such a sick shop 567 King and awesome staff. Big Ups!
Thanks for letting us occupy your house, giving us all beds, and love Mamma Jude.

Check out the 567 King!!! Its got the most awesome range of products, cans, nibs, records, markers, pens, caps, clothes fucken everything its a Hip Hop head and  painters paradise.

Posted by Inter-Location Project at 5:58 PM No comments:

Posted by Inter-Location Project at 5:57 PM No comments:

Empty Show.
There was a small art markets, a vegie bbq and later another performance of the puppet show Legs.

Mays Lane Mural mural.
Unfortunately due to rain we weren't able to do the May's Lane mural collaboration.

>See the full set of Sydney photos here<
Posted by Inter-Location Project at 9:29 PM No comments:

Say No to Racist Pigs...

While in Sydney we came across this extremely racist mural near where we were staying. Some righteous vandals had painted it... Nice work!

Here is a link to past righteous graffiti makeovers.
http://banthebogan.blogspot.com/

This mural has been up for quite some time. Around 8 people have been arrested in protesting it. The council is sitting on their hands. ILP is about building cross border community links around community and urban art practice. This mural is against these principles between borders and works well at creating internal one between one another. We support anyone who wants to use their art practice for good and take action against this hideous mural and mindset. 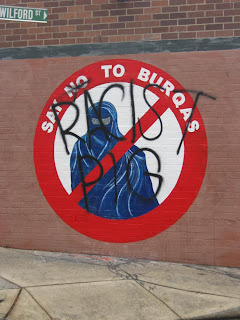 Posted by Inter-Location Project at 9:11 PM No comments:

Two ILP artists took time out of their busy schedules to help the police get the job done at Occupy Melbourne. Here's a news flash of their efforts:

Posted by Inter-Location Project at 7:50 PM No comments:

It has been a momentous month for Asiik City Festival in Melbourne. Exhibitions, puppet shows, performances, mural collaborations, and workshops! With our final Melbourne event -Ride Bersama and Puppet Show- finishing last night, we thought it would be good to take a breath and look back on what we've done...  (see the full round-up on Flickr here)

Starting with a prelude on the 9th of October, ILP artists Tuff Guts, Snotrag, LoveHateLove, Tom Civil, George and Bayu Widodo and others collaborated on a mural along the back of Junkies warehouse on Cocoa Jackson Ln in East Brunsiwck: 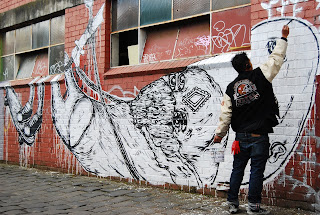 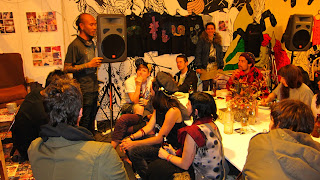 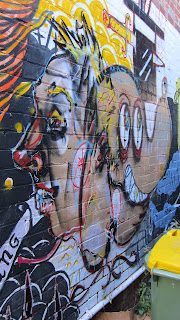 George, Snotty, Tuffy, Bayu, El Kampretto and Bayu were invited by the builders arms to paint up the inside for their re-launch:

ILP and Seed Factory artists Hamishi, Tom Civil, El Kampretto, Bayu Widodo, Snotrag, Tuff Guts, Georg, Will, LoveHateLove, plus friends of the Seed Factory painted its walls together on the 23rd of October: 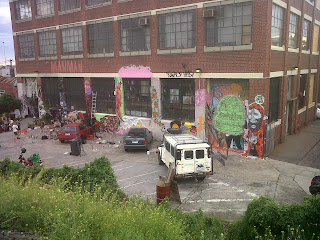 Woodcut printing with Bayu Widodo kicked off our series of workshops for the festival on the 30th of October: 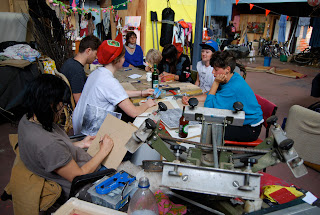 Kamprett showed us how to make tall bikes at Loophole Community Centre. And those brave (foolish?) enough got to have a ride around!! 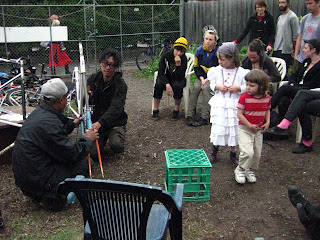 LoveHateLove finished up his residency at  Blender street-art studios in style with a closing exhibition and market: 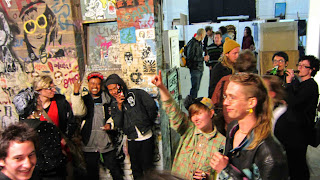 LoveHateLove put a contemporary twist on traditional Wayang puppets at his workshop: 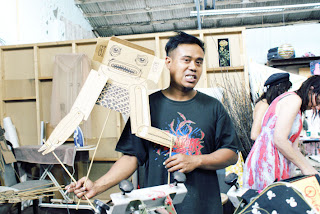 Melbourne artists Emily, Bidi, and Snotrag showed us how easy it is to make our own screenprints: 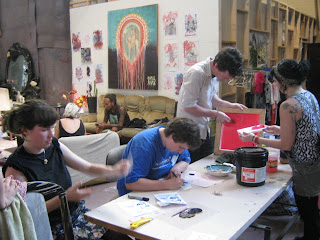 El Kampretto takes the last in our series of Melbourne workshops - this one on DIY tattoo machines and maintenance:

and check out our full album of photos here on Flickr

Inter-Location Project
ILP is an independent organisation formed to build an arts bridge between the two cities of Jogjakarta, Indonesia and Melbourne, Australia. ILP aims to express and maintain varied forms of artistic and cultural dialogue, creative commonalities and friendship between the two cities. PLEASE EMAIL inter.location.project [at] gmail [dot] com